Courtney, Sophia and myself left home at 6:30AM happy to be going back to the beach. We arrived at Decatur AL at 5:30PM. It rained the entire drive but wasn’t too bad.  We stayed at the same Doubletree on the river as last year – in a nice big suite. We had dinner at Big Bob Gibson’s – our favorite north Alabama BBQ spot. I had Brunswick stew, pulled pork, greens and baked beans. Courtney and Sophie each had good platters and all was great. I had iced box lemon pie and Sophia had peanut butter pie and bought three bottle of their white BBQ sauce.  I was asleep by 8:30PM.

We left the hotel at 7:30AM and arrived in Grayton Beach around 1:30PM. We headed directly to Red Bar as we had a couple of hours to kill, and the place was hopping.  We had a few beers at the bar waiting for a table which is just fine! I had fish and chips for lunch, Courtney had some delicious smoked tuna salad and Sophia had a chicken sandwich.  We stopped at house to drop off some stuff and then went to Publix to stock up for the week and checked into our house right at 4:00PM.  They were very particular about check in time.  We liked the house. Perfect.  We moved stuff in and then I took of to pick up Claire and Corey at Panama City Beach Airport – 35 minute drive.  Their flight was on time and made it back in no time and had late dinner of pan fried burgers, tater tots and key lime pie – of course.

Claire, Corey and Courtney went to the bakery that we like around the corner as well as stopping at the grocery store again.  We had cinnamon rolls, scones and some GF goodies for breakfast.  We headed down to the beach where it was sunny and nice and started our daily routine: beach, lunch, beach.  Tough life.  Courtney and went to Goosefeathers during lunch break and got some nice looking grouper for dinner as well as shrimp and smoked tuna dip. The kids headed to Seaside for pickles pre-dinner which was super crowded and taken over by teenagers.  It stayed that way unfortunately all week.  Our house had a great patio looking over the state park land looking west so we got the late afternoon sun and sunset – excellent cocktail hour spot that we enjoyed all week.  We had grilled grouper for dinner that was fabulous.  We played dominoes after dinner to finish a great first day. 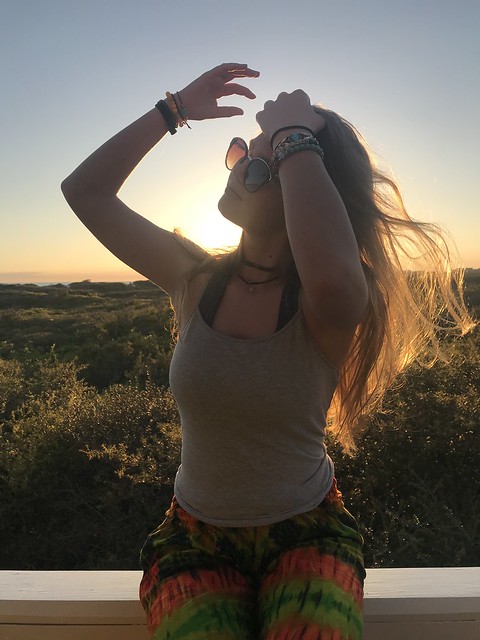 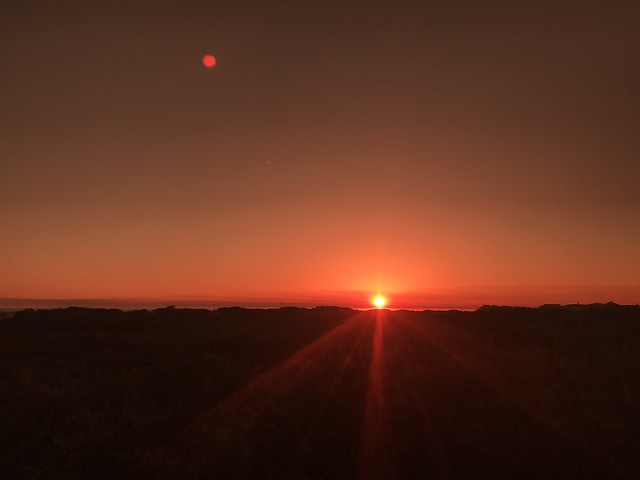 We had chocolate and jelly beans for breakfast to celebrate Easter – and a few other things.  Sophie and I biked into Seaside after breakfast.  The bike path between Grayton and Blue Mountain was under construction which forced us onto the road in that section which was a pain.  But it wasn’t as bad as we thought it would be.  Amavida line was way too long so we just walked around enjoying the sunshine.  The rest of the day was all beach on a beautiful Easter Sunday.  We steamed shrimp and grilled chicken for dinner enjoying the patio in the evening and not eating until late.  We caught the second half of Jesus Christ Superstar on TV that I thought was really well done. 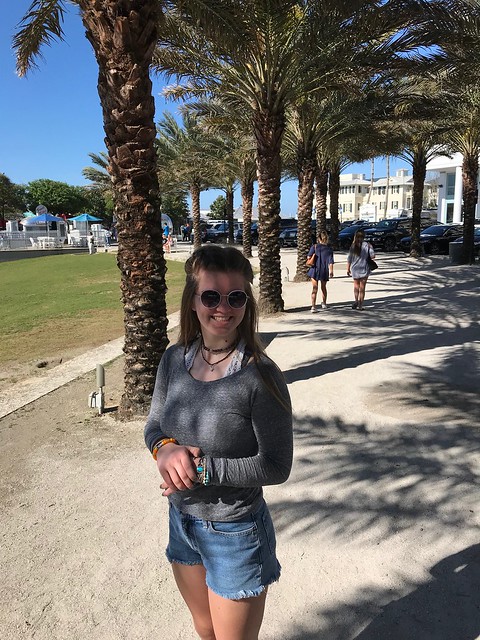 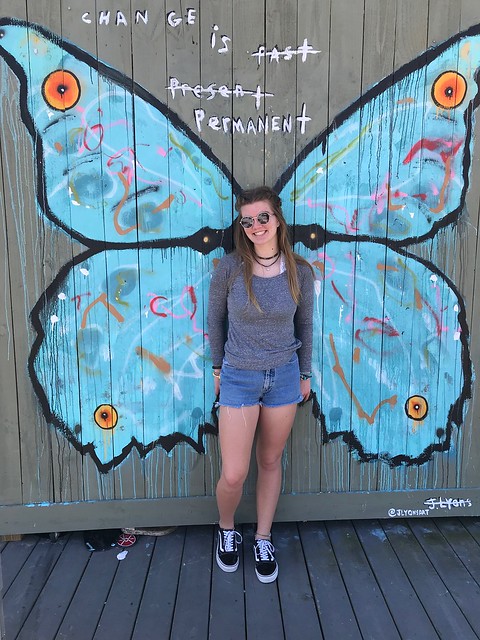 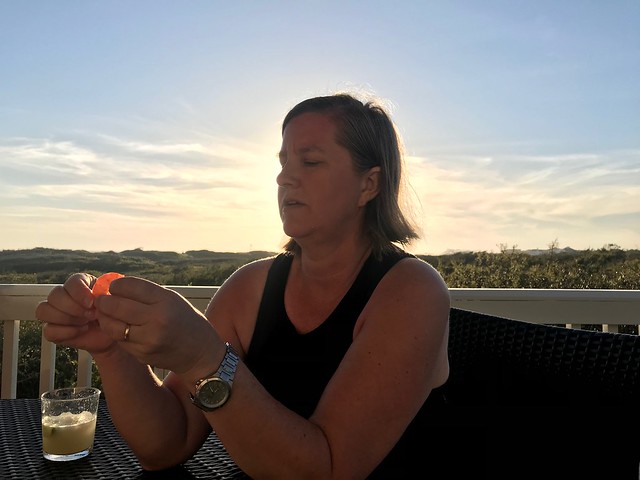 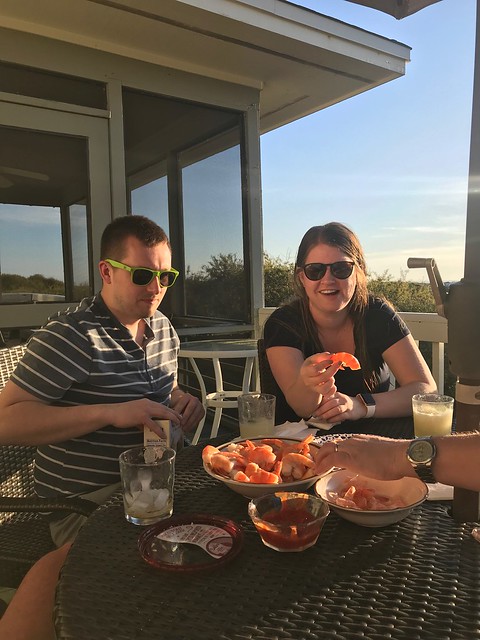 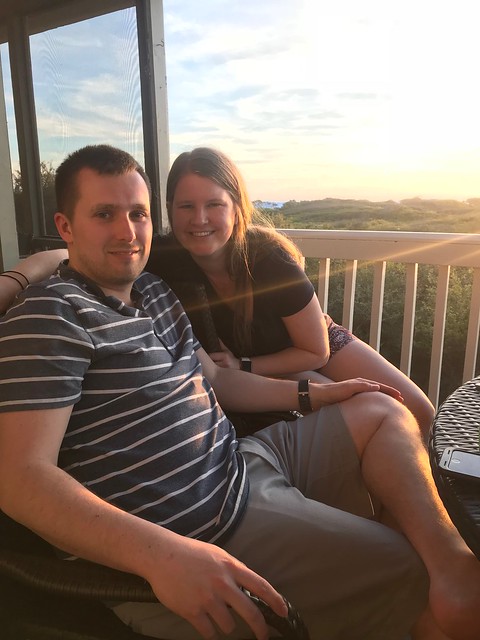 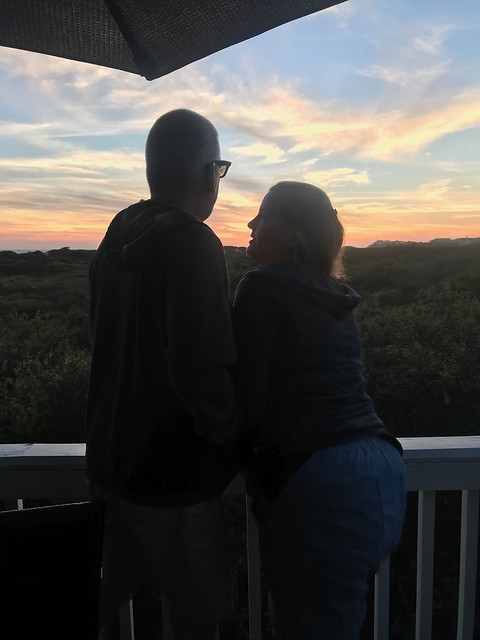 Courtney and I biked to Seaside early morning.  Stopped at Amavida and walked around.  We biked all around Watercolor.  Claire and Corey biked later in the morning and went out to lunch at the Oyster bar.  Otherwise it was another beautiful day on the beach.  We went to the burger bar for dinner which was packed.  We were waiting at the bar for a table and ended up just ordering food and ate at the bar which was fun. 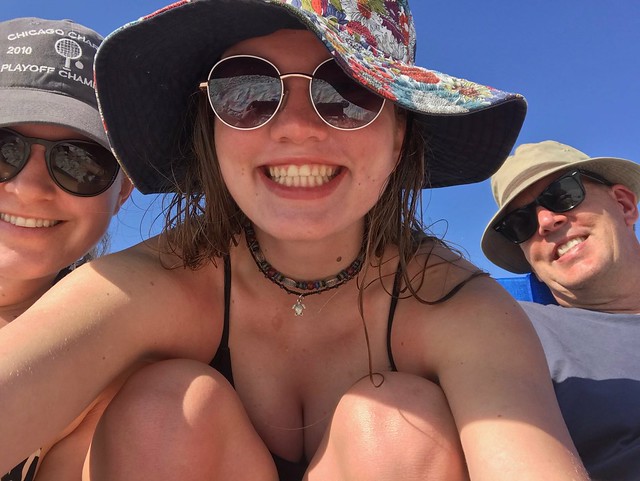 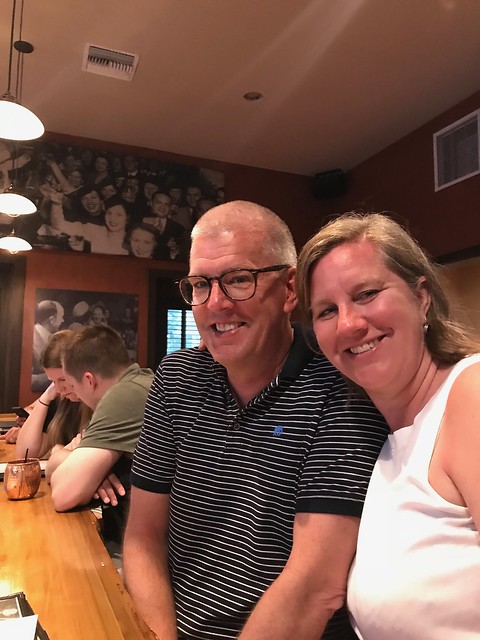 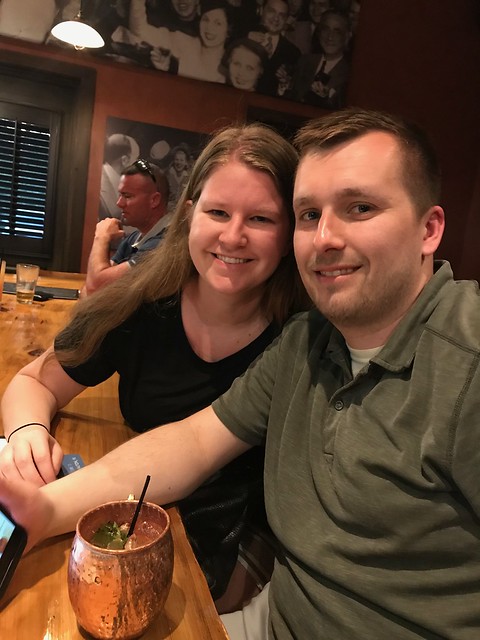 It was a foggy morning but cleared up pretty quickly and turned into another beautiful day.  The previous days sand castle was still there so we added on for another good showing.  Just another perfect beach day and stayed down until 6:00.  We had tacos for dinner and tried to go out for ice cream but everywhere was too crowded. 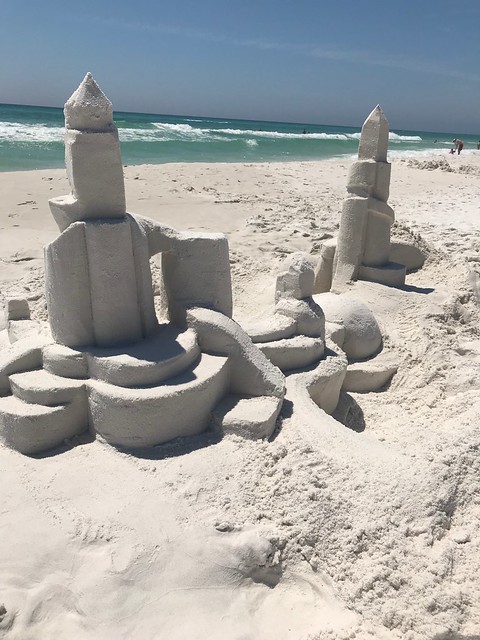 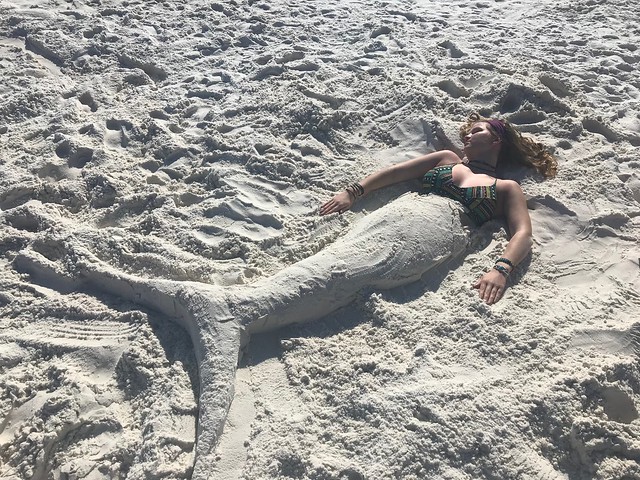 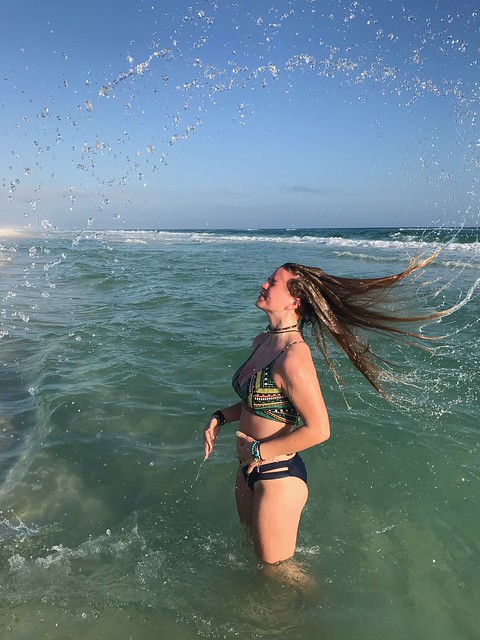 A strong storm blew through early morning and it rained pretty steady all morning.  We decided to go to the Destin outlets around 10:00. So did everybody else.  Big mistake.  The traffic was horrendous and the outlets were packed.  We tried to stop for lunch at Stinky’s and Perfect Pig but both were too crowded. We ended up at Black Bear, a new place in Grayton Beach which was very good. Courtney and I split carrot soup with shaved beets et un sandwich du jambon. Sophie’s friend from school whose family was staying a few miles down the road met us at lunch and spend the day and night with us.  Miraculously it cleared up in the early afternoon and lo and behold it was a great afternoon on beach.  We had a great dinner of grilled rib eyes, baked potatoes and more key lime pie. 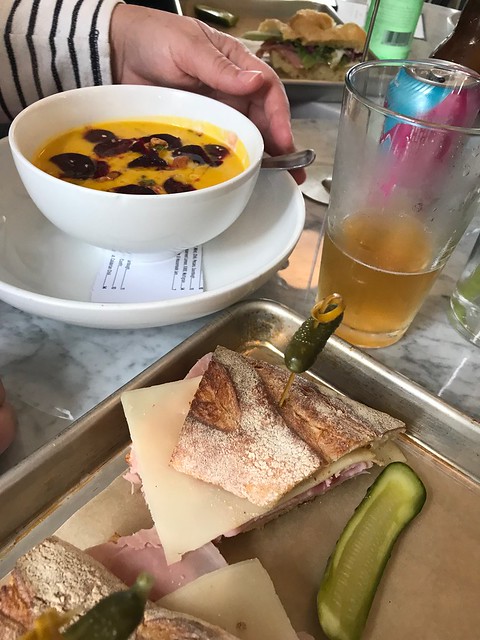 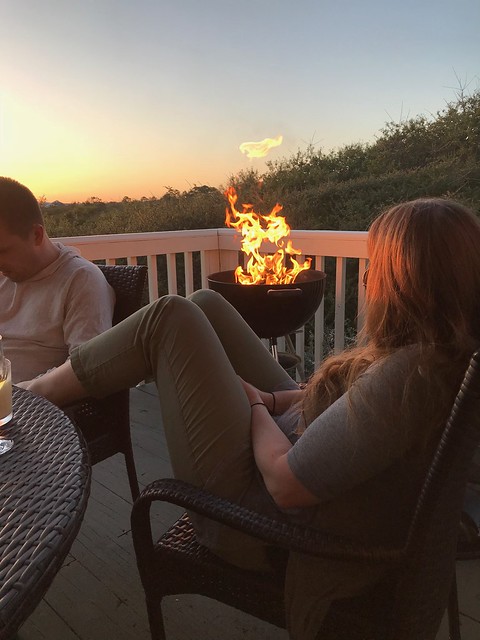 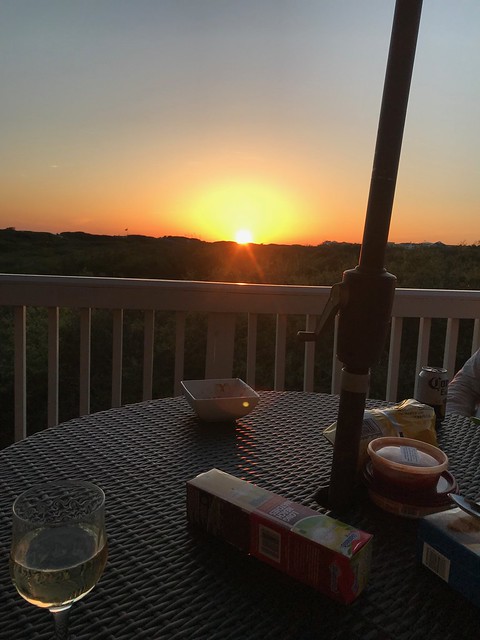 It was a chilly morning. Courtney and I went for bike ride around Watercolor, through the back ending up at Publix and going back through a crazy busy Seaside. Way too crowded.  We didn’t go down to beach until 11:30 or so. Another nice day. Super calm and hot even though it was in low 70s. We stayed down beach until 4 and then went to Seaside for shrimp, oysters and fried pickles. We had late night dinner of boboli pizzas and then played cards against humanity. 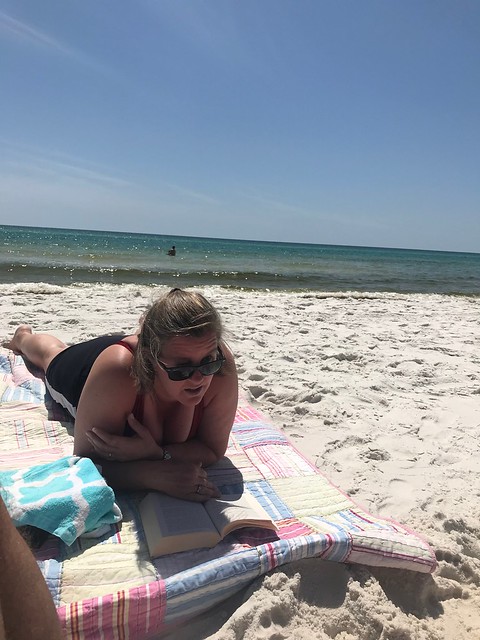 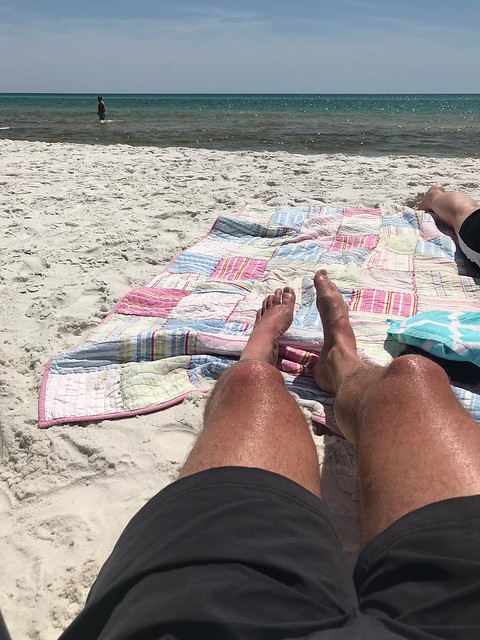 Courtney and I went on an early walk on the beach.  It was a beautiful morning once again.  Clear water and blue sky.  We spent the whole day down the beach with a quick break for lunch. We drove Claire and Corey to the airport around 4:00.  We ended up going to dinner at a place called Boon Docks off the bridge by the airport just following a sign that was there.  It turned out to be nice – on the harbor with nice view and lots of seafood.  We had fried shrimp, oysters, grouper and more fried pickles.  It was a good find.  We got home and packed everything up as we were planning to leave at 3:00AM for the long drive home. 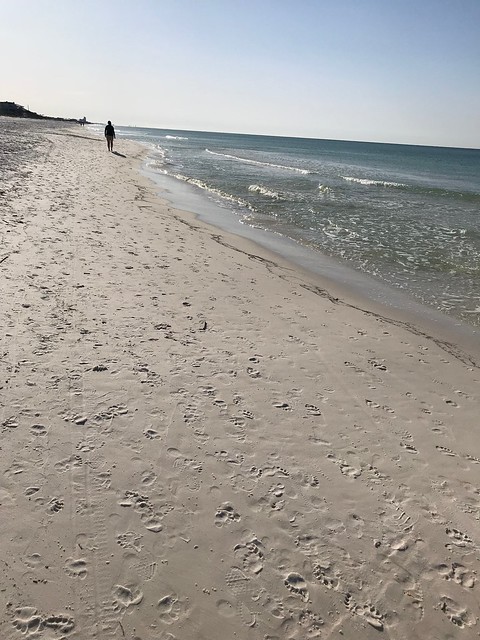 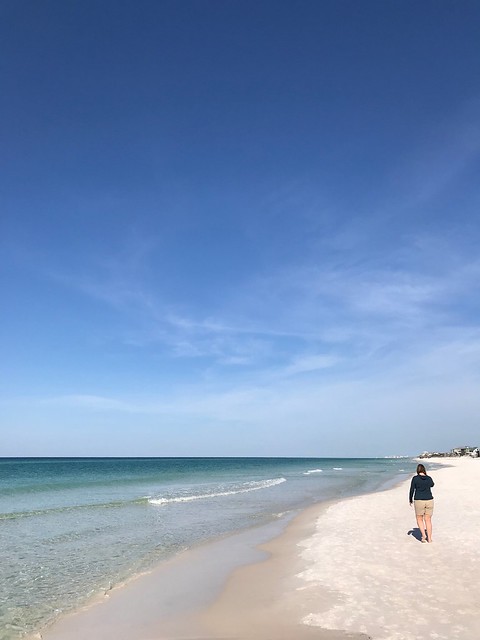 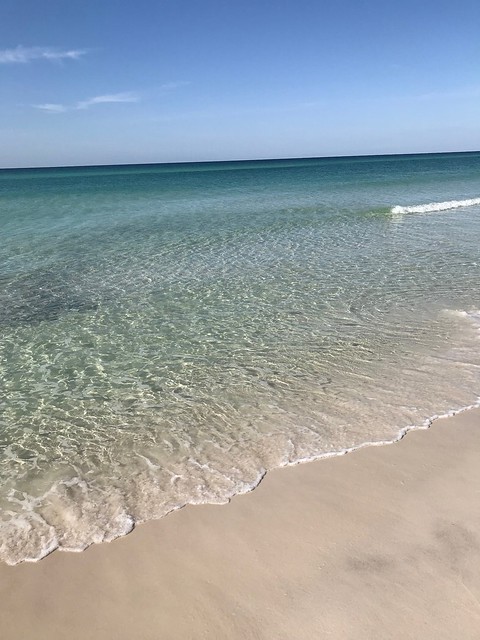 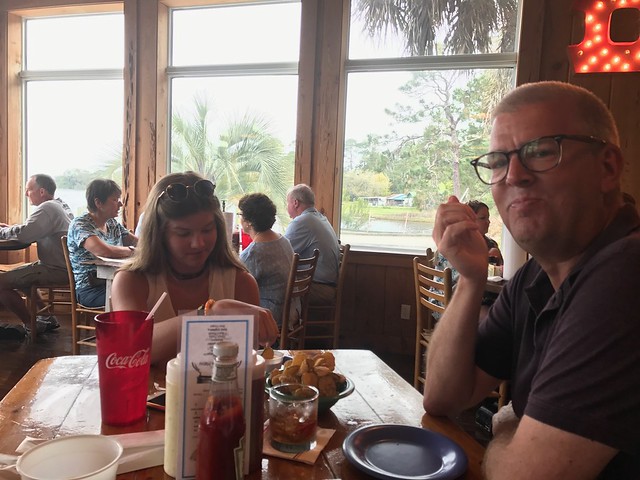 We left Grayton Beach at 3:00 AM and drove all the way.  16 hours.  Harsh but we did it with no troubles.  It was another great stay in FLA.

One thought on “Grayton Beach, March-April 2018”