We make this vegetarian gluten free gravy every thanksgiving as a second gravy option because everyone needs gravy on their mashed potatoes and stuffing for Thanksgiving.  I use vegetable broth instead of turkey broth and leave out the tarragon because I don’t like tarragon. 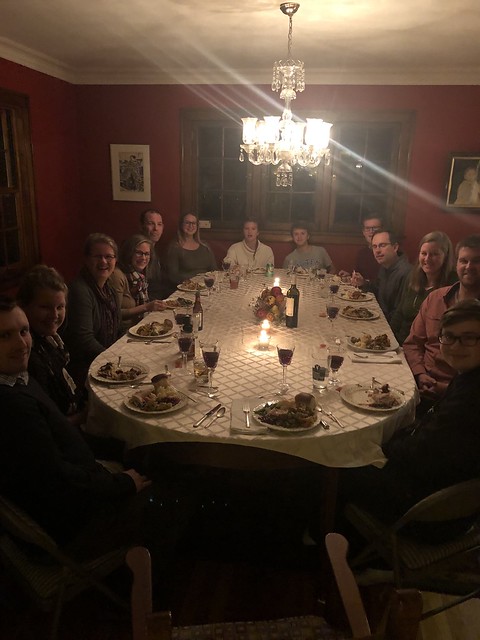 Heat olive oil in a large skillet over medium-high heat. Cook beef in batches in hot oil until browned completely, about 5 minutes per batch. Remove browned beef cubes to a plate lined with paper towels, keeping skillet over heat and retaining the beef drippings.
Cook and stir onion, celery, and carrots in the retained beef drippings until just softened, 2 to 3 minutes. Stir mushrooms and garlic into the onion mixture.
Pour red wine into the pan; bring to a boil while scraping the browned bits of food off the bottom of the pan with a wooden spoon. Continue cooking the mixture until the wine evaporates, 7 to 10 minutes. Stir tomatoes into the mixture.
Return beef to skillet with potatoes, basil, thyme, marjoram, and sage. Pour beef stock and tomato sauce over the mixture. Bring the liquid to a simmer.
Reduce heat to low and simmer until the beef is very tender and the sauce is thick, 4 to 6 hours.

This is a weekly stand by that we have been making for years and years.  It’s not really much of a recipe, but we base it on a recipe from a cookbook that I think somebody gave us as a wedding present – almost 23 short years ago.  Everybody likes it and it couldn’t be easier to make.  (Jack always gripes about the mushrooms but tough luck Jack.)

We made this last Sunday and made it even better because we made homemade pasta.  We haven’t made pasta in a super long time and me and Sophie had fun doing it together.  I don’t think she ever made it before.

The pasta dough recipe we use is from the New Basics. It makes about the equivalent of one pound of dried pasta:

Place the flour in a food processor, and with the motor running, add the eggs one at a time.  Continue processing for 15 seconds.

Turn the dough out onto a lightly floured surface, and knead until it has formed a smooth, firm ball.

Cover with a kitchen towel and let rest for 30 minutes.

Divide the ball into 5 pieces.  Use pasta maker to roll out each ball for whatever kind of pasta you want.

Back to the ham, mushrooms and peas: in goes the butter:

In a large skillet, heat the oil briefly, and sauté the garlic, celery, leeks or onions and red pepper, stirring the vegetables until slightly softened, about 3-4 min.

Meanwhile, boil a kettle of water, and preheat the oven to 375.

Stir the mushrooms into the red pepper mixture, cover the pan for a few minutes until the mushrooms start to give up their liquid, then remove the cove, and sauté the vegetables, stirring them, until all the liquid has evaporated.  Remove the vegetables from the heat and set them aside.

Place the pans in the preheated oven, pour the boiling water into the outer pan to a depth of about one inch, and bake the loaf for 1 hour 15 minutes.  Remove the loaf pan from the outer pan and from the oven.  Let the loaf rest for 15 minutes, then remove it from its pan for slicing.

In a large skillet, sauté the onion, garlic, and mushrooms in sherry and butter until the vegetables are soft.

Add the chopped broccoli, spinach, and salt.  Stir to combine the ingredients, reduce the heat, cover the skillet, and simmer the mixture for about 5 minutes or until the broccoli is tender-crisp.

In a baking pan approximately 13 x 9 x 2 inches, spread ½ cup of tomato sauce on bottom.  Layer the lasagna ingredients as follows: Arrange three strips of lasagna noodles on the bottom.  Spread half of the cheese mixture on noodles, then half of the vegetable mixture, and 1 cup of the tomato sauce.  Repeat, starting from the noodles.  End with a layer of noodles topped with the remaining ½ cup of tomato sauce.  Sprinkle the top of the lasagna with additional Parmesan, if desired.

Bake the lasagna at 375 for 25 minutes.  Let it stand for about 10 minutes before serving it.

In a small bowl, soften the bread cubes in the water or broth.  Add the cubes to the turkey mixture along with the egg or egg whites.  Mix the ingredients well, and shape the mixture into 24 1 ½-inch balls.  If the mixture is too well to form into balls, either refrigerate it for about 1 hour or add some dry bread crumbs

Heat 2 t. of the oil in a large nonstick skillet.  Add the mushrooms to the pan, and sauté them over medium-high heat to brown them.  Remove them with a slotted spoon to a large bowl.  Set the bowl aside.

Reduce the head to medium-low, and add the meatballs in batches of 8, browning them on all sides.  Add more oil if needed.  Transfer the browned meatballs to the bowl containing the mushrooms.

This is an old stand bye in our house.

Sauté mushrooms and onions in butter.  Cook rice according to package directions.  Mix all together.  Bake uncovered for one hour at 350.

Freezes well before or after cooking.

Heat ¼ cup of oil in wok and quick cook garlic and ginger.  Add chicken and sesame seeds and stir fry until brown, 4-5 minutes.  Remove from pan.  Heat remaining oil and add vegetables and salt and stir fry until crisp tender.  Mix cornstarch with bouillon, add to wok and stir until thickened.  Add chicken, toss all ingredients together and serve over rice

Sauté chicken pieces in half the butter.  Remove from skillet and place in casserole.  Sauté mushrooms in rest of butter and add to chicken.  Put cheese and wine in pan and melt cheese over low heat.  Continue to gradually increase heat to medium low until cheese and wine mix to a smooth sauce.  Pour and stir into chicken/mushroom mixture.  Cover and place in oven at 350 for approximately 30 minutes.  Serve over rice or spinach noodles.