Grace is doing a twelve week internship at Boyd Gaming in Las Vegas so Courtney and I went to visit her for a long weekend of fun and frivolity.  We worked all day and caught the rapid to the airport to take an early evening flight.  We got to Vegas with no problems and Grace picked us up and drove us to our hotel, the  Mirage.  We forced ourselves to stay up to 11:00PM Pacific time by walking around for a bit and having a drink in one of the many bars in the hotel.

We slept pretty well and didn’t end up getting up too early.  We hit the Mirage buffet around 8:00AM as it was included in the good deal we got for the weekend.  We don’t have much experience with buffets but this one sure seems awfully nice.  Everything we had was great – except the coffee,(No it was really bad-cbh) but I’m a snob.  I had fruit, cinnamon rolls, banana Nutella pancakes, bacon, pork belly, tamales on and on.  Just a little bit of each but it was a great meal.  We then took to the strip for a nice morning stroll taking in the sites: north past Treasure Island and then walked around inside the Wynn.  Went back to the hotel and were at the pool by 10:30. The pool was awesome with lots of palm trees, waterfalls and Pina coladas.  We had a lunch reservation at a place we wanted to go to but bagged it as we were enjoying lazing by the pool. We opted for a mid day happy hour meal later on instead.  After a short siesta we hit the pavement again walking through the humongous Caesar’s palace and then looped back to the Venetian where we were meeting Grace.  We had drinks and really good food at Canonita where Grace and her friend Julie eventually met us.  We took off for the Mirage afterwards as we had tickets for Cirque De Soleil’s  LOVE.  I have been wanting to go to this show for years and years and was so excited to finally be able to go.  It was great.  The staging, acrobatics, lighting, music and everything was amazing.  After the show we grabbed a daiquiri for the road and joined the throngs on the strip.  We walked through the Bellagio, watched the fountains a couple of times and  ended up back at the Mirage having pancakes for a late night meal.  We said goodbye to Grace who lyfted back to her place and quickly crashed after a long day. 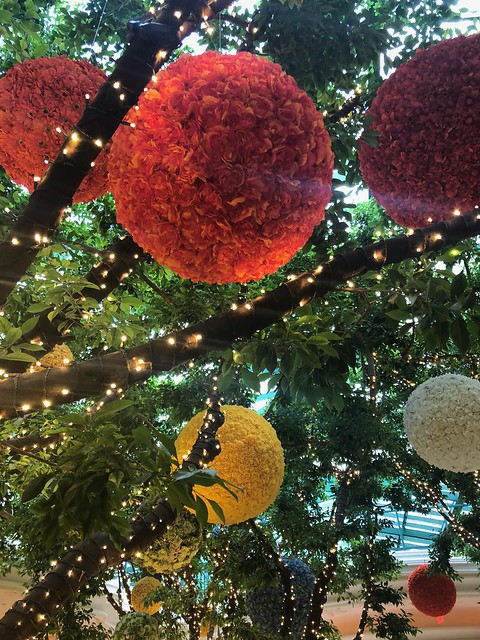 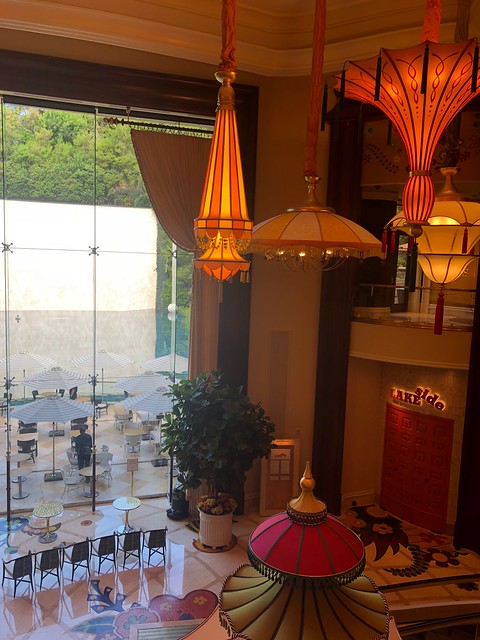 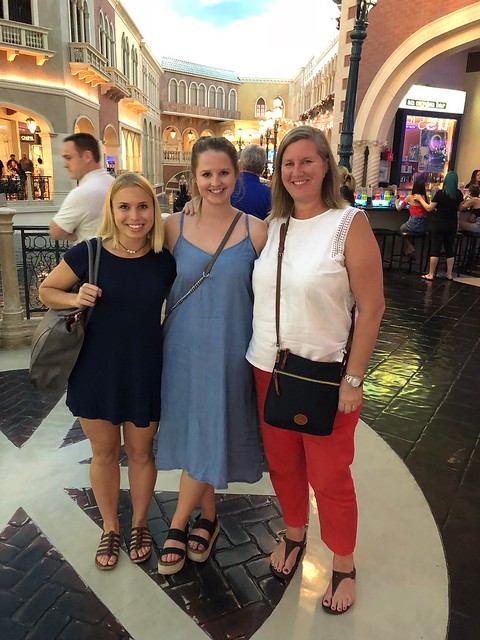 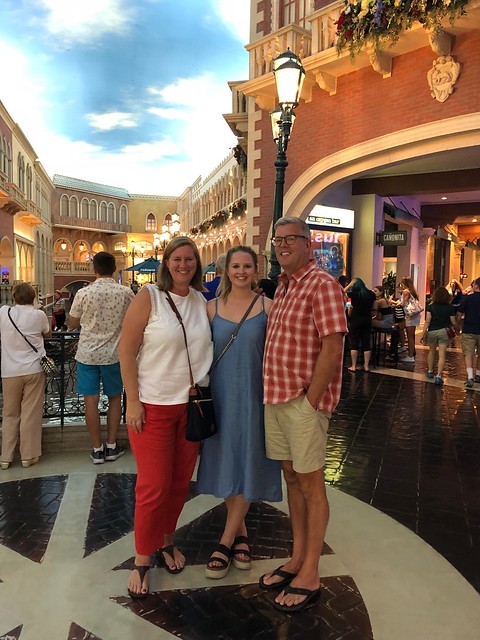 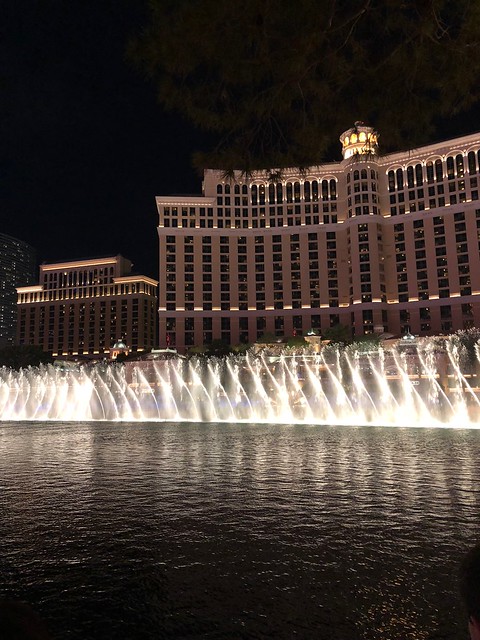 We slept really well and were quickly getting acclimated to west coast time.  We hit the buffet again for another breakfast feast and then walked some it off checking out other spots.  We liked the Linq Promenade which was pretty new and found a nice store where we bought a few things.  We ubered out to the Orleans – a casino off the strip- where Grace’s office was.  Grace showed us around, introduced us to her colleagues and we had lunch at a place there with Grace and Julie.  Grace was able to get the afternoon off so we went back to the UNLV dorm where she was living to get a few things and then headed back to the Mirage to spend the afternoon at the pool like good Las Vegas tourists.  The pool was hopping but we managed to get a spot and had a good time cooling off in the pool, people watching and drinking too many pool drinks.  We ubered over to Fremont street.  We had tickets to see magician Mike Hammer at the Four Queens.   It was fun. 50% magic and 50% comedian. He was really good though.  Grace got pulled up to the stage for one of the tricks. After the show, we took in the crazy sights on Fremont street– people zip lining overhead, street performers, classy tourists…   We checked out the Container Park, an area with repurposed containers turned into small shops, restaurants and bars.  We sat outside at one of the bars. I had a very good Manhattan while we listened to a good Indigo Girls sort of band.  We then went a couple blocks down town and had dinner at Carson Kitchen and a great late night meal.  We sat on their roof top patio with the rest of the hipsters and split tempura green beans, gyro tacos, a butter burger and tater tots.  We walked back down Fremont Street and each headed back to our separate places after a fun night. 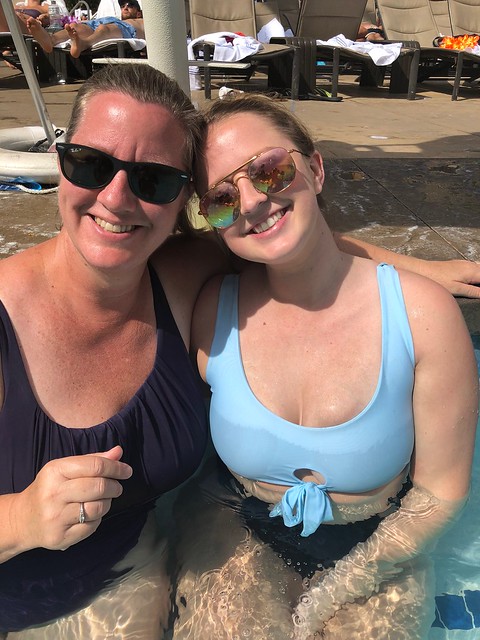 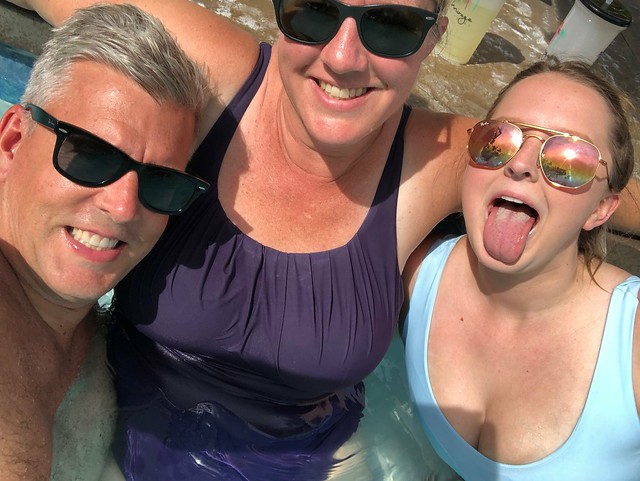 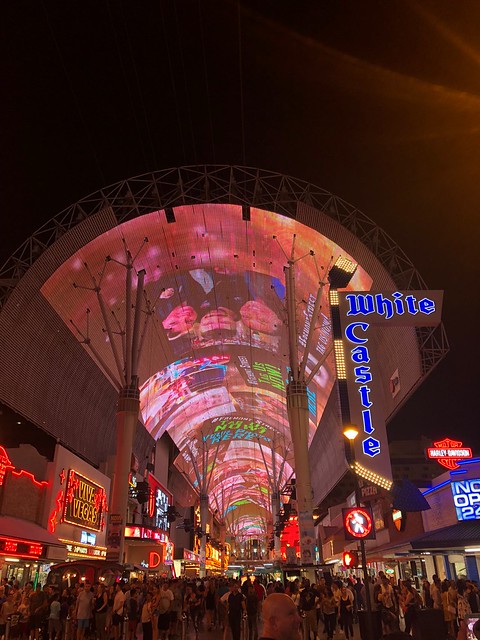 We slept in past 8:00AM Vegas time.  We got our stuff packed up and then headed down to the breakfast buffet which turned out to be a brunch buffet since it was Saturday and ended up having even more food… shrimp, prime rib, Chinese food, good desserts… can get used to this life.  We checked out around 10:30 and rented a car to go exploring.  We picked up Grace and headed to Mount Charleston – state park about an hour drive west of Las Vegas.  It was interesting to see how built out Las Vegas is getting and then it abruptly ends at the mountains.  The mountains were beautiful.  The elevation was pretty up there. We stopped at the welcome center in the park and soaked in the views and then went on about an hour hike up up up the mountain that was supposed to end at a waterfall but we never were able to find the waterfall.  It was fun to see something different – and so different than Las Vegas.  The elevation made the hike tougher than we expected.  We drove back to Las Vegas and went to Town Square Park – an outdoor mall place – and had late lunch/early dinner at Yard House – a sports bar with lots of beer choices.  It was nice to get out of the heat as it was super hot out.–it felt like we were standing in front of an open oven.  We still had some time to kill before we had to get to the airport so we did the Vegas thing and went to the Hooter’s casino and played blackjack for an hour.  The only gambling we did all weekend except for 15 minutes before the show on Friday.  Grace and I started with $20 each playing the cheap blackjack table and ended with a total of $100.  It was fun.  We said goodbye to Grace dropping her off at the nail salon to spend our $60 winnings and then headed to the airport to drop the car off and head back home on the red eye.  The red eye is as bad as it sounds, as usual,  but we made it back to CLE at 4:00AM, ubered home and were happy to be home after a fun long weekend. 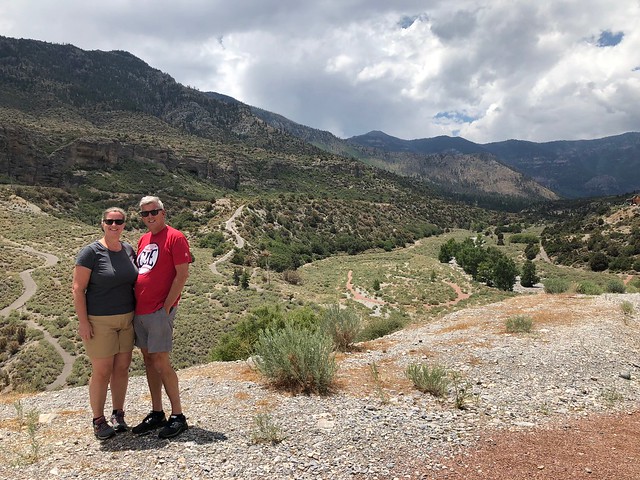 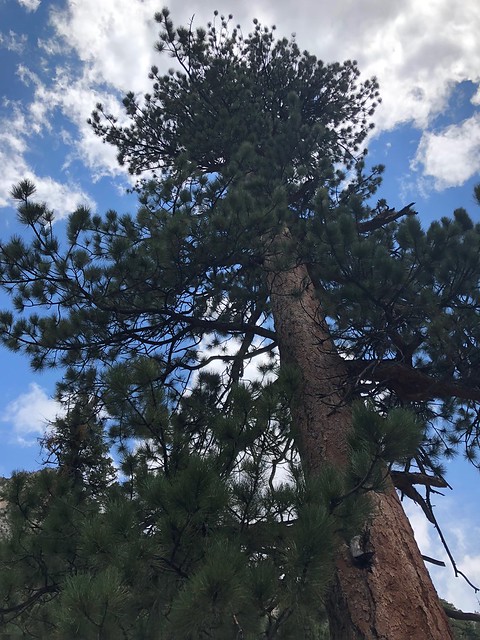 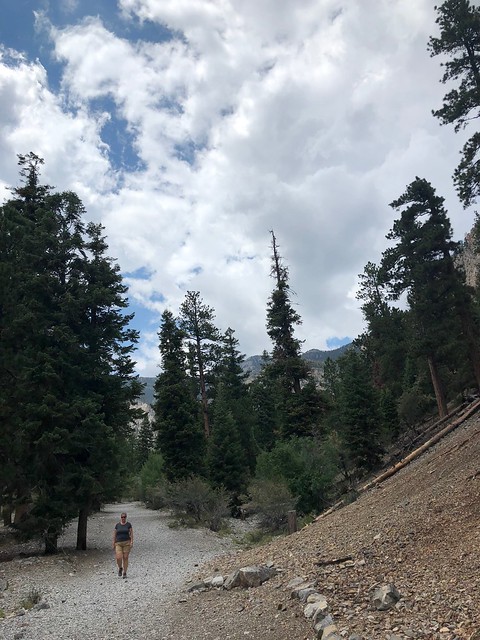