Courtney and I went on a long weekend trip to southern Ohio to celebrate her birthday.  Leaving Sophie and Jack at home we headed south stopping at Heinen’s in Strongsville to stock up for the weekend.  We stopped at the new Ikea in Columbus and stayed for about an hour and a half checking it out, just buying a few things – our typical Ikea items.  The checkout lines were horrendous – would have skipped the whole place if we knew we would have to wait for so long.  We headed to downtown Columbus and had lunch at Wolf’s Ridge Brewery.  Nice place and ended up having brunch.  Their coffee and vanilla infused beer was a keeper.  I brought a six pack to bring home.  We headed down to Hocking Hills area which was just about an hour from Columbus.  We stayed in a cabin at Chalets in Hocking Hills.  It was a good choice – all the cabins were private, seemed nice and only a minute or so from the state parks.  We settled in, tried out the hot tub and quickly got into relax mode.  We made steak, baked potatoes and salad for dinner and hung out for the rest of the evening.

After a good nights sleep we drove to the state park which was just five minutes away.  We went on a vigorous hike from Old Man’s Cave to Cedar Falls – about six miles and it took us 2 1/2 hours.  It was a cloudy day in the low 40’s but quickly warmed up as we started walking through the woods.  There were very few people parked when we started and we only ran into people a few times.  The area is beautiful with huge ravines, hemlock forests, mossy caves and waterfalls.  We especially liked Cedar Falls area that felt prehistoric and the walk from there back to Old Man’s Cave was through the ravine and pretty amazing.  We went back to our cabin after our long hike and took a nice long hot tub soak, had lunch and relaxed for a few hours.  We headed out to an area called Rock House around 3:00 and just hiked about an hour around the area.  After walking down into a huge ravine there was a huge cave that you could walk into that was like a rock house.  Pretty cool.  Made it back for a quick cocktail and then went to dinner at the Inn at Cedar Falls where we had a great dinner.  It’s a nice relaxed but classy atmosphere and food was great – we both had salad and then I had rack of lamb with cous cous and great roast carrots, Courtney had pistachio crusted scallops with risotto and we split a pumpkin creme brûlée for dessert.  All very good.  Quickly crashed at home after a long day. 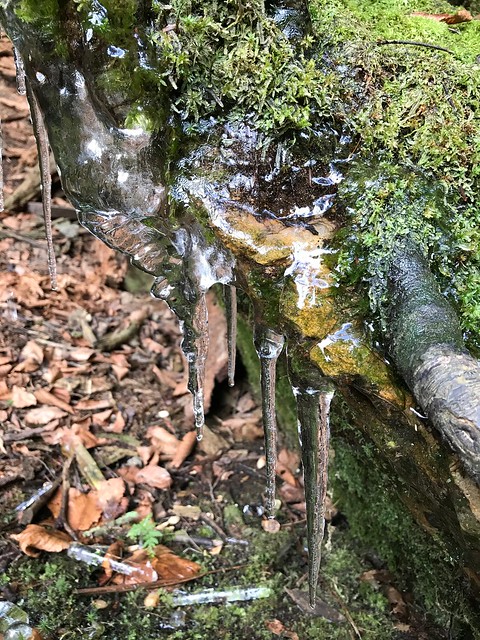 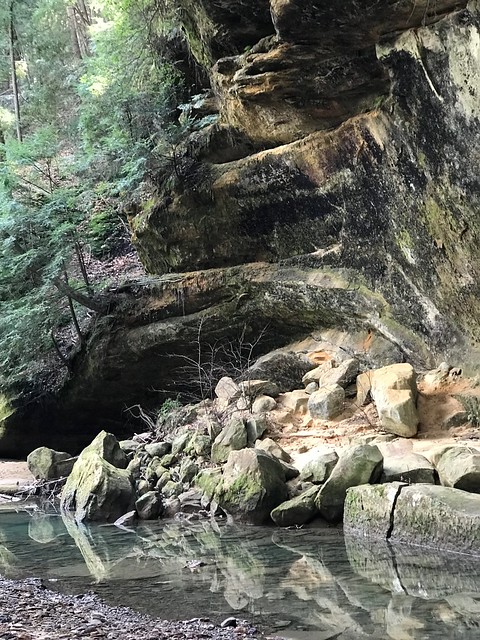 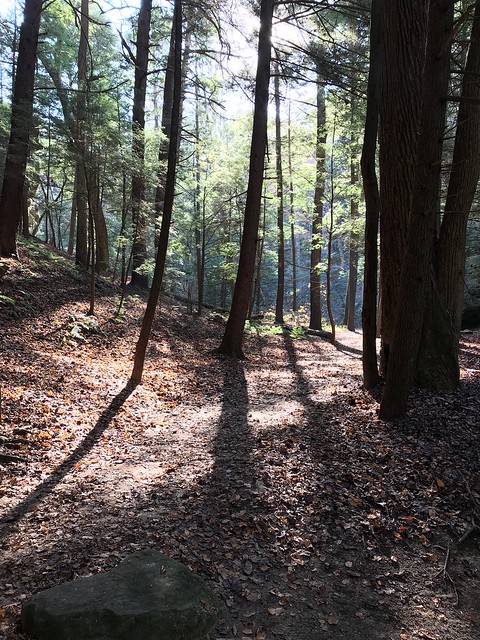 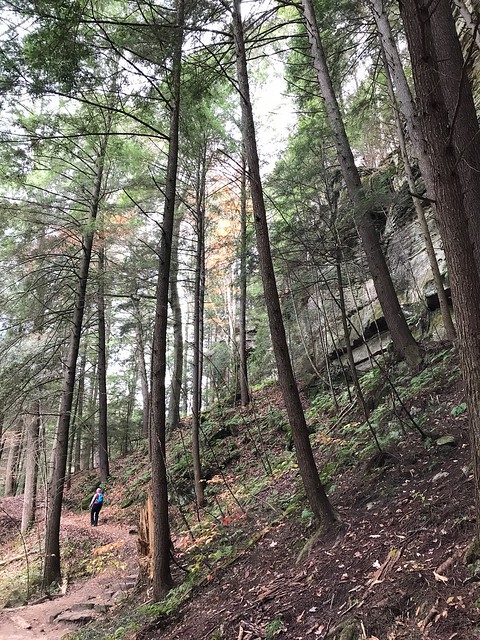 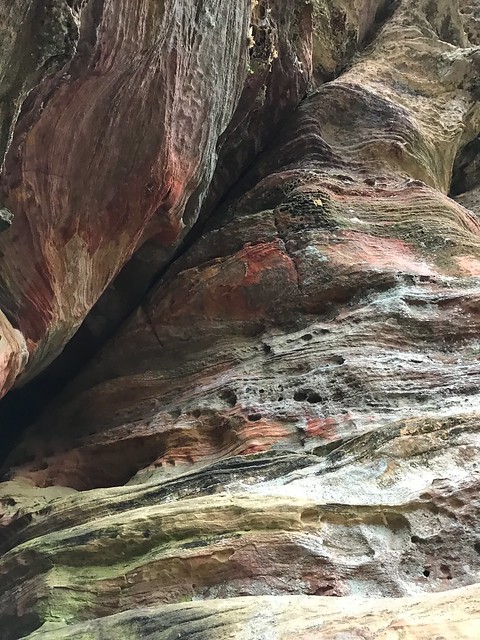 We went on another 5 mile aggressive hike in the morning, starting at Ash Cave, going to Cedar Falls and then back.  Beautiful scenery again and we had the trails all to ourselves other than the trailheads where there were just a few people.  Found a fire tower towards the middle of the trek – we started climbing up but changed our mind about 1/3 of the way up as it was pretty scary.  We relaxed the afternoon away not doing much of anything besides hot tubbing, reading and sleeping.  We ended up not turning on the TV once which is always a good sign.  We cooked ravioli for dinner and went to bed really early. 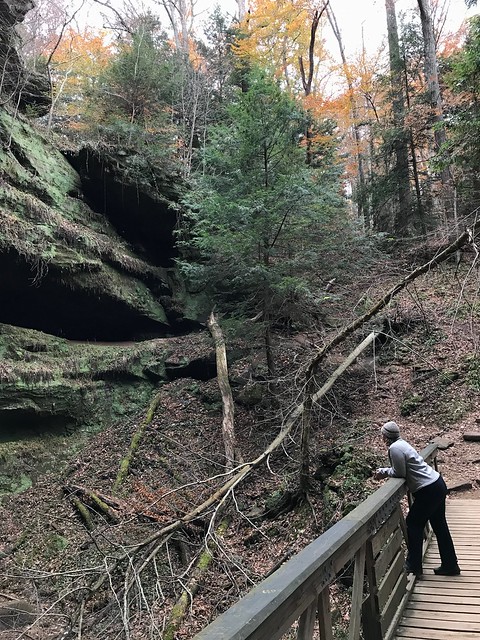 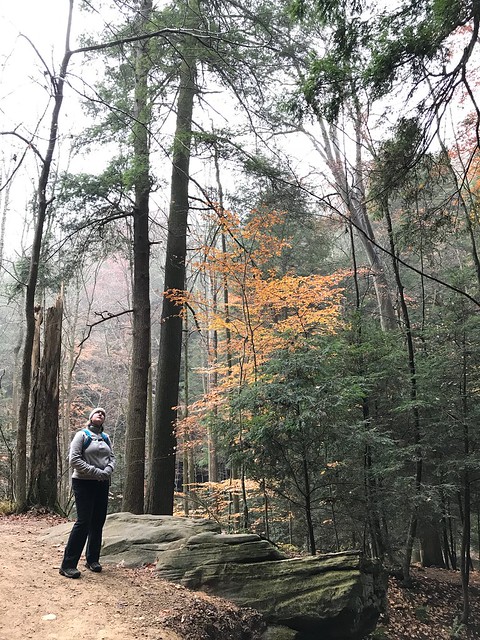 We took off around 9:00 from our cabin and decided to drive home through Amish country as we wanted to check out a place that sold sheds that we heard about.  It was interesting driving through all the little, mostly depressed towns.  Trump country for sure.  The shed store didn’t impress us much but we did stop for lunch at Der Dutchman which is always the best reason to go to Amish country.  We also stopped at Lehman’s and got a few things.  Got home without any trouble and after getting unpacked we decided to run downtown to see if we could get lucky at the Wicked lottery.  Sure enough… Courtney’s name was drawn so we lucked out and got 2 $25 tickets box seats right up front.  We hung out at Masthead for an hour having beer and pizza and then saw Wicked which was great once again. 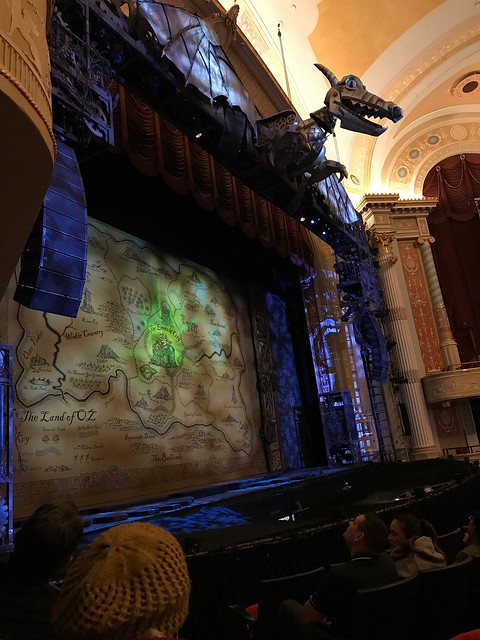