I went on a long weekend solo trip to visit Grace in Las Vegas.  I left work at 3:00PM, took the rapid to the airport arriving in plenty of time and had an easy direct flight arriving 8:00PM Vegas time.  Grace picked me up at the airport and we drove home to her apartment where I was staying with her.

I dropped Grace off at work after stopping for coffee and then hit the road for Red Rocks Canyon Park which was just a quick 30 minute drive.  I drove down a road towards Calico Basin which was actually a residential  neighborhood with just a few amazing houses in the desert.  I parked the car at the end of the street and walked toward the hills taking in the amazing scenery.  Blue skies, no one else around and beautiful scenery.  I hit the road, paid the fee to get in the park, drove around the scenic loop soaking in the scenery and stopping at two or three spots to explore on foot.  I stopped at “Ice Box Canyon” and started on the trail that goes up to the mountain and through canyons but ran out of time and didn’t get to the end… next time.  I drove back to LV to pick Grace up as she was only working a half day.  We went to lunch at Esther’s Kitchen in the art’s district.  It’s a popular place and was perfect for lunch.  We each had pasta, bread and wine – all excellent.  We drove back to Grace’s place so she could change out of her working clothes and then hit the road for more hiking.  We drove about an hour and a half north to Valley of Fire State Park.  The park was amazing  – like walking on the moon.  Truly breath taking.  We drove around the loop, stopping at different places, taking lots of photographs and going on short hikes.  We drove back to Grace’s place and took a rest for awhile and then drove to the strip.  We had dinner at Bobby Flay’s Mesa Grill at Caesar’s Palace.  We both had margaritas.  I had ancho rubbed pork tenderloin and sweet potato tamale and Grace had whatever the fish special was.  Everything was very good.  After dinner we walked the strip – checking out the Christmas displays at Bellagio and getting dessert at the Momofuku window in the Cosmopolitan.  Their cereal milk soft serve, that we had in NYC in the spring was our goal and it did not let down.  So good. 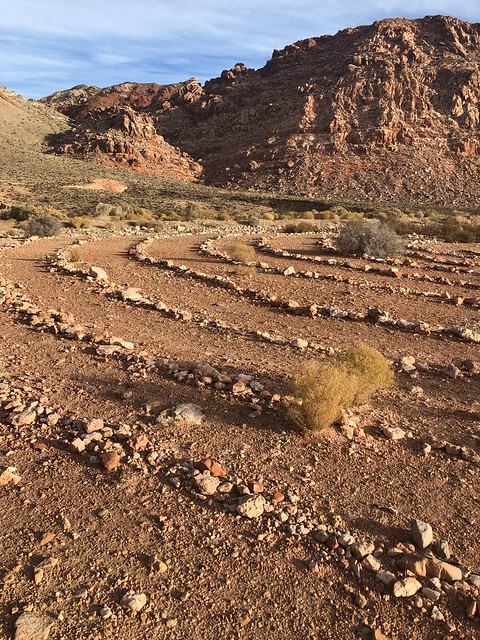 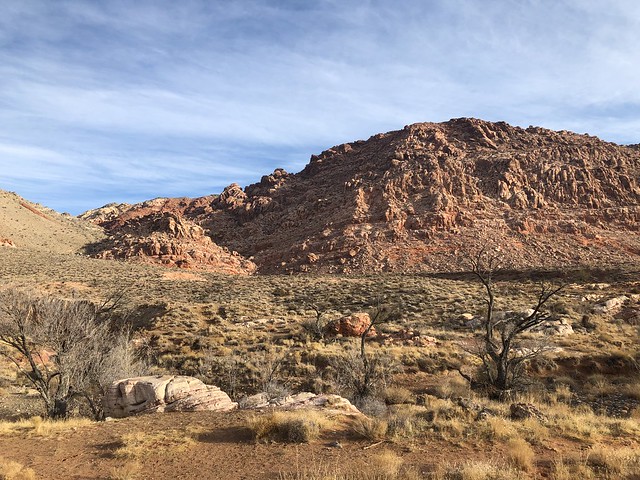 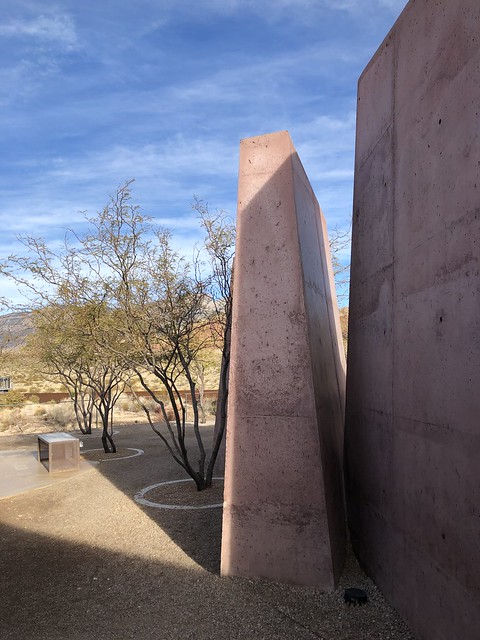 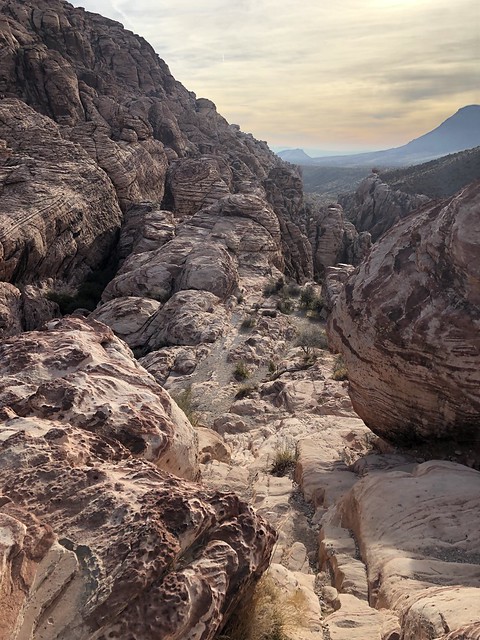 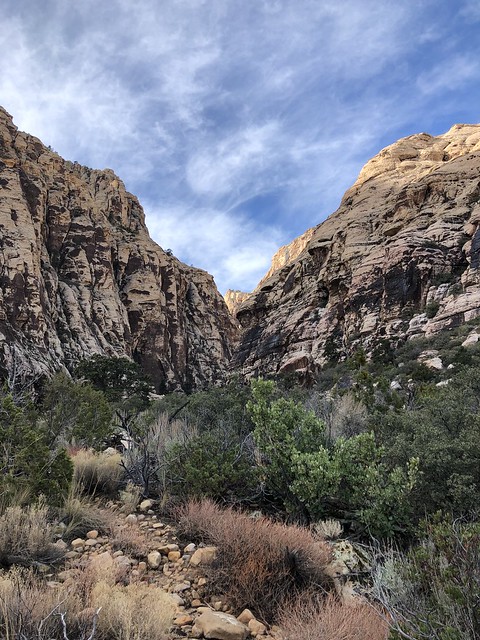 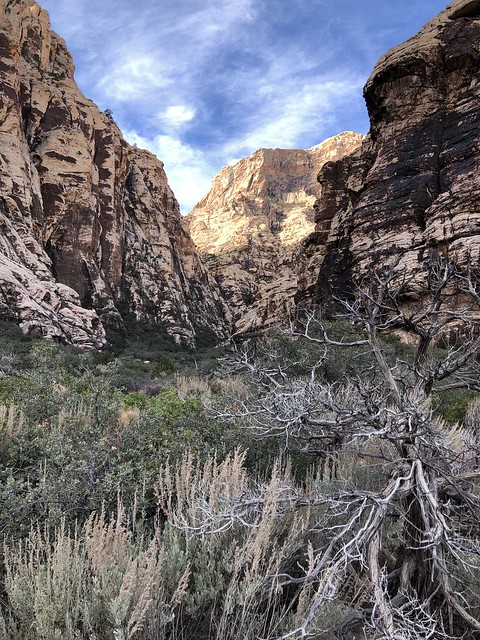 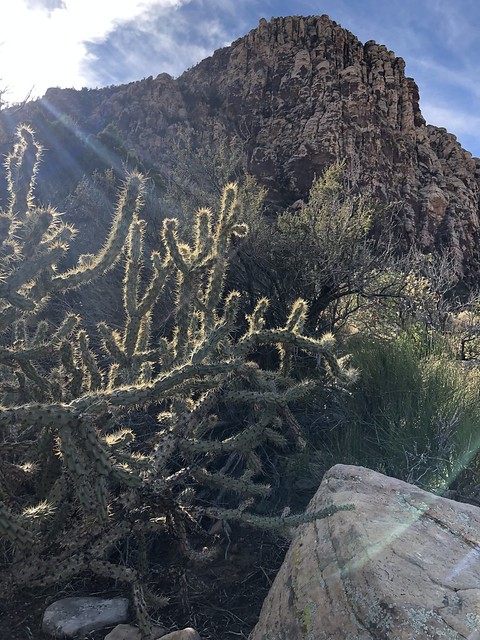 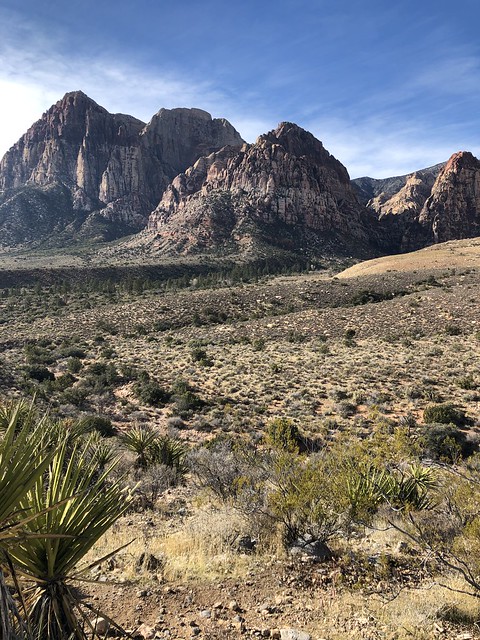 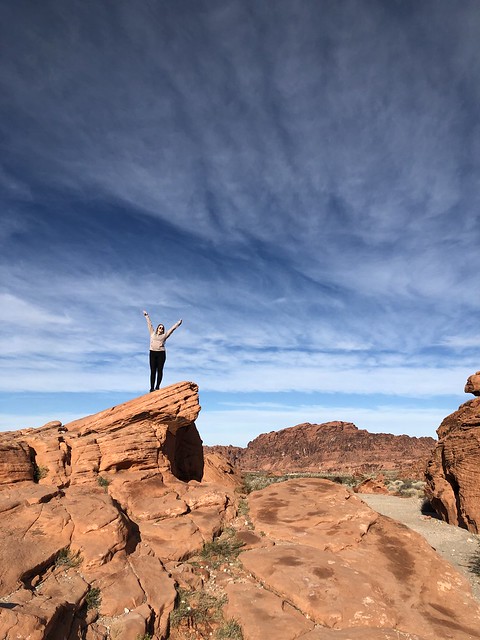 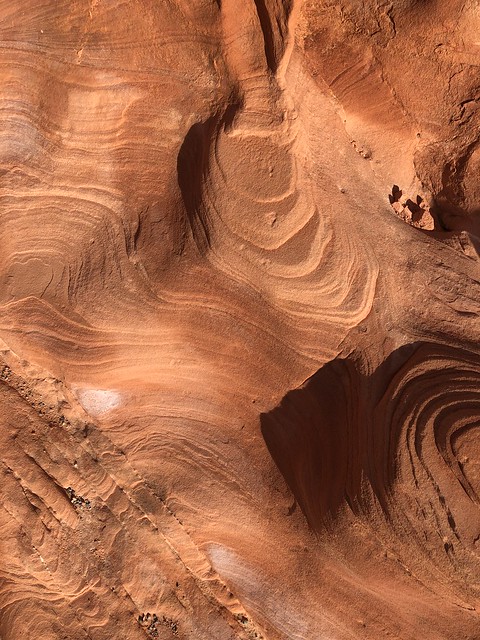 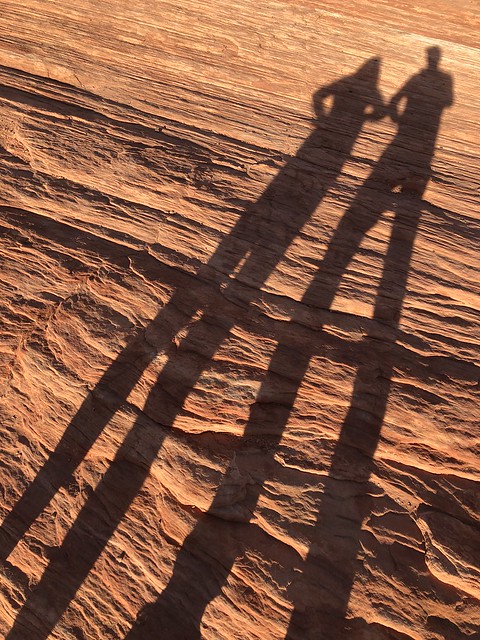 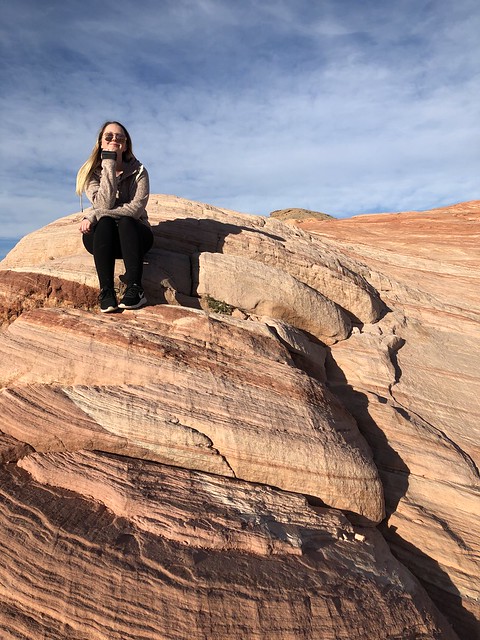 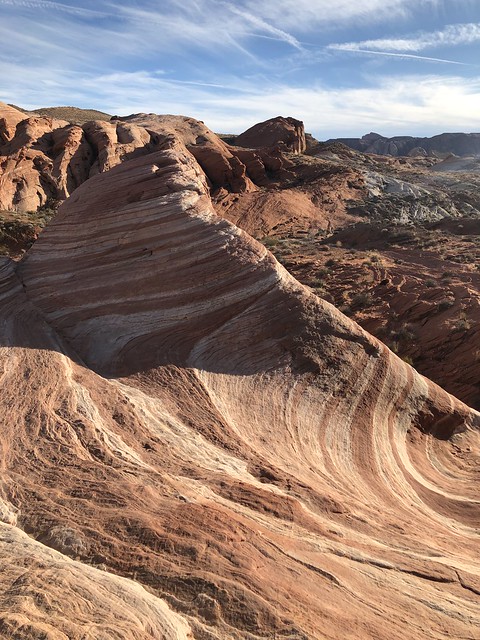 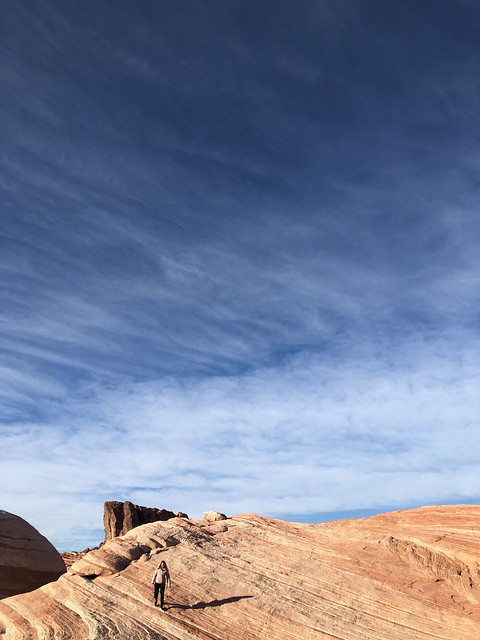 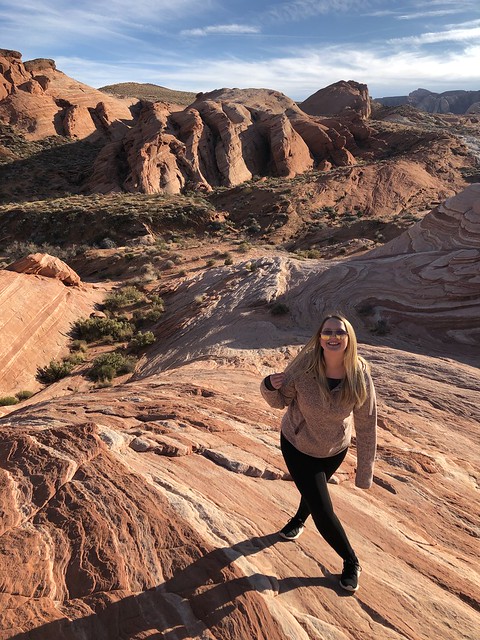 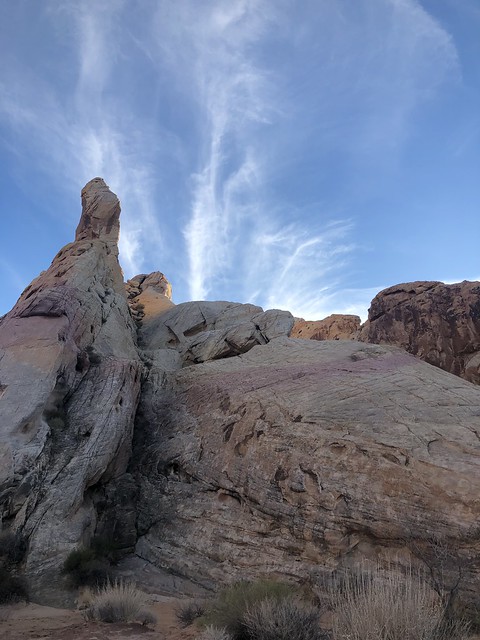 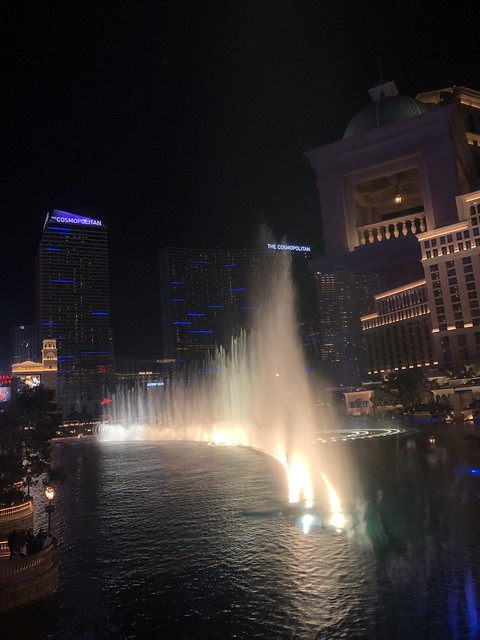 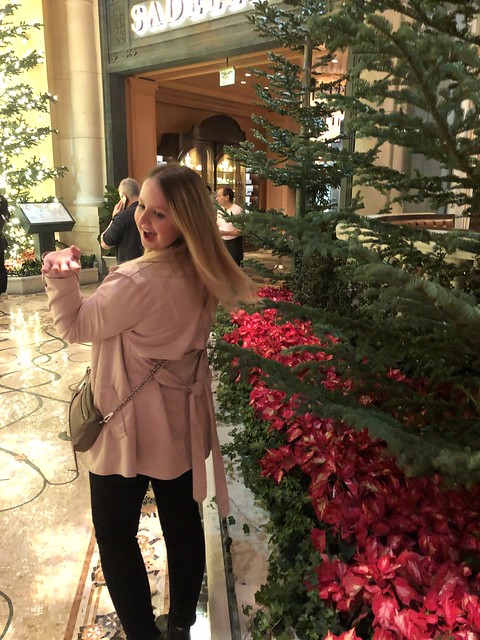 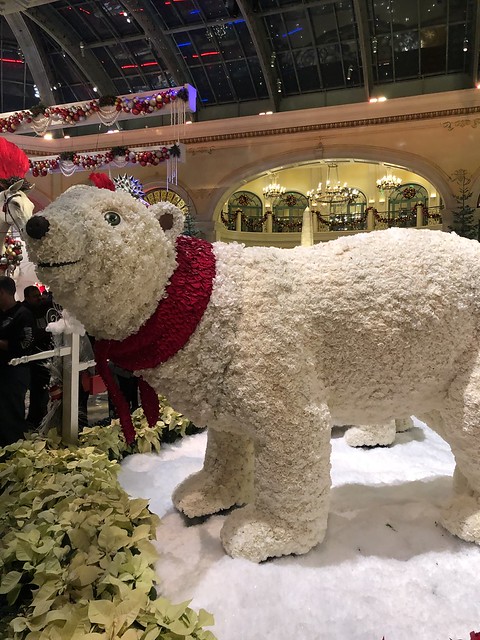 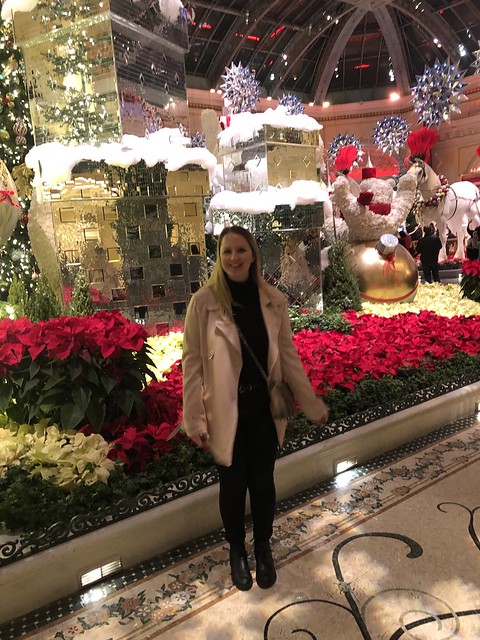 I dropped off Grace at work in the morning and then worked for two hours at a coffee shop downtown called Mothership Coffee.  It was a cool little place in a set of new shops that someone converted from an old motor motel.  That section of Las Vegas, just beyond Freemont Street, is quickly turning into a great spot.  I decided to drive to Hoover Dam to check it out as I never have been there.  It was just about an hour drive.  I took the tour that brought you into the powerhouse and then to some interesting viewing areas.  Amazing to say the least.  Pictures don’t do it justice. I liked all the art deco details and the hugeness of everything.  I tried to find a hiking trail in the area but wasn’t able to find it so I decided to head back to Grace’s neighborhood to explore.  I had lunch at a place called Honey Salt in Summerlin.  I sat at the bar and had an Anchor Steam and avocado toast.  I browsed a bit at some stores and then went back to Grace’s place, took a nap and waited for her to get home from her holiday party.  We went to Fremont Street for the night.  We grabbed some drinks and walked around enjoying the craziness.  We stopped and played some $5 blackjack but had really bad luck and only lasted around 20 minutes – my only gambling of the trip.  We had a really good dinner at a popular Thai place on Fremont Street called Le Thai.  It had a great atmosphere and the food was excellent.  After dinner we walked around some more and stopped at a club for one last cocktail.  Fun night. 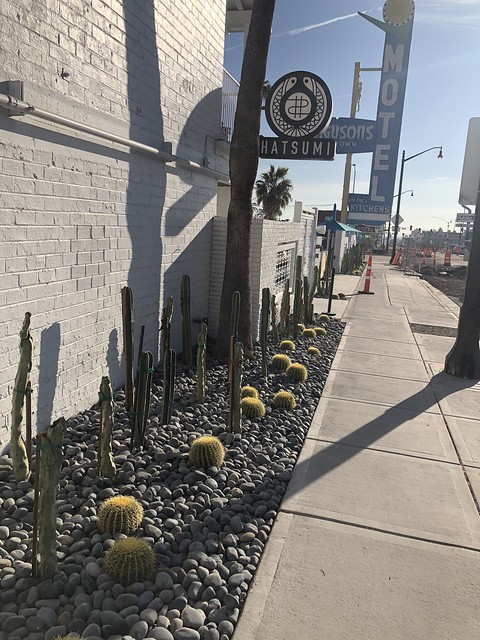 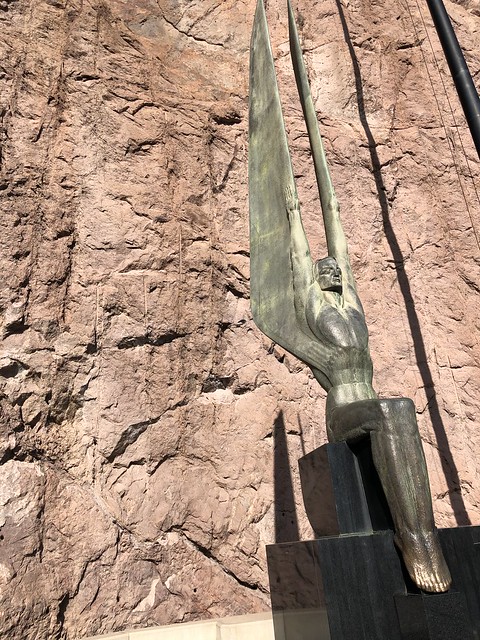 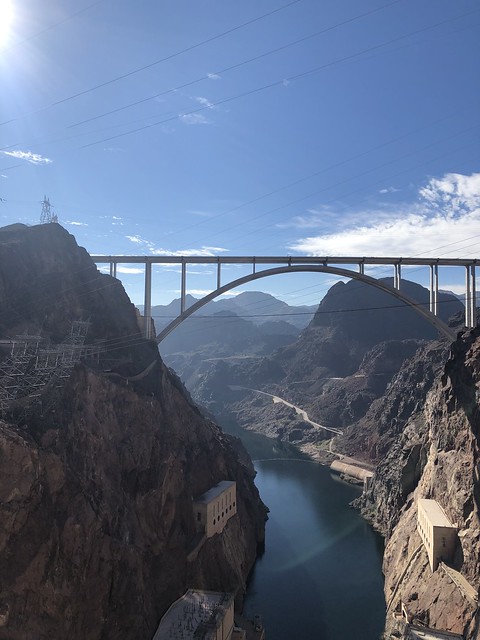 We slept in a bit.  I drove around the corner to get some coffee from Starbucks and stopped at a fancy donut place and brought them back.  We eventually got ourselves going and went out shopping.  Grace needed some side tables and lamps for her living room so I told her I would get them for her.  We went to Target which didn’t have much of anything so we then went to IKEA which of course had everything and then some.  We stopped and In and Out for burgers for lunch.  I’ve never been to one so that was a nice treat.  Burgers were good but fries were only so so.  We then went shopping for a couple of hours at a nearby outdoor shopping place that had lots of good stores.  We bought some Xmas presents as well as some things for the upcoming wedding.  We went back to Grace’s and put together the IKEA items and rearranged her living room just a bit and it looks great.  After taking a good afternoon nap, I packed up my stuff as I was flying home at 11:00PM and we hit the road.  We decided to go to Chinatown.  First stop was the Golden Tiki. An over the top tiki bar with all the trimmings.  We sat at the bar, each had a good tropical drink and listened to the cheesy bar playing in the corner.  The bathrooms are worth the trip.  We then went a few blocks down to a small pho place that Grace heard was good.  There were only about 8 tables that were all full and about 12 people waiting for one so we decided to go somewhere else – next time as it looks like a good spot.  So we ended up going to Sapporo Revolving Sushi which ended up being super fun.  After waiting for about 30 minutes at the bar, drinking a beer and sampling some sake from the very nice bartender we got to our table.  A revolving track of little plates of sushi went around and you picked what you wanted, piling up your plates on the table so they knew how much to charge.  You could also order from an ipad thing and a little robot rolls out with your order.  So cool.  We ate lots of sushi and ordered some pho and then match creme brulee.  Everything was great… and relatively cheap.  It was time to get to the airport after dinner so Grace dropped me off and was off to another party.  My red eye flight was on time and I actually slept for most of it… a first.  The flight was even thirty minutes early getting to CLE.  Courtney picked me up at the ungodly hour and we went right back to bed when we got home. 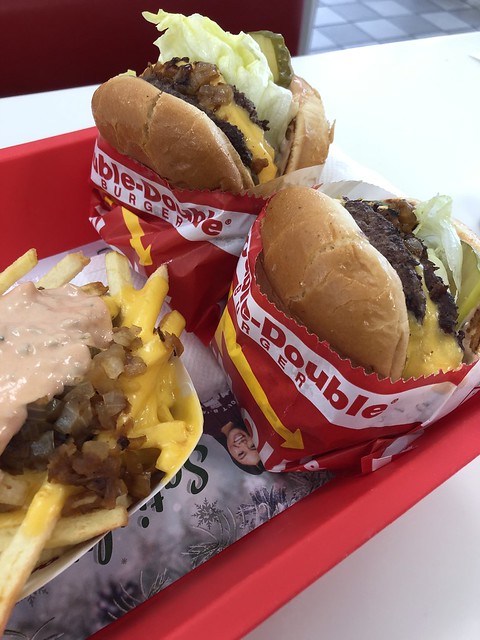 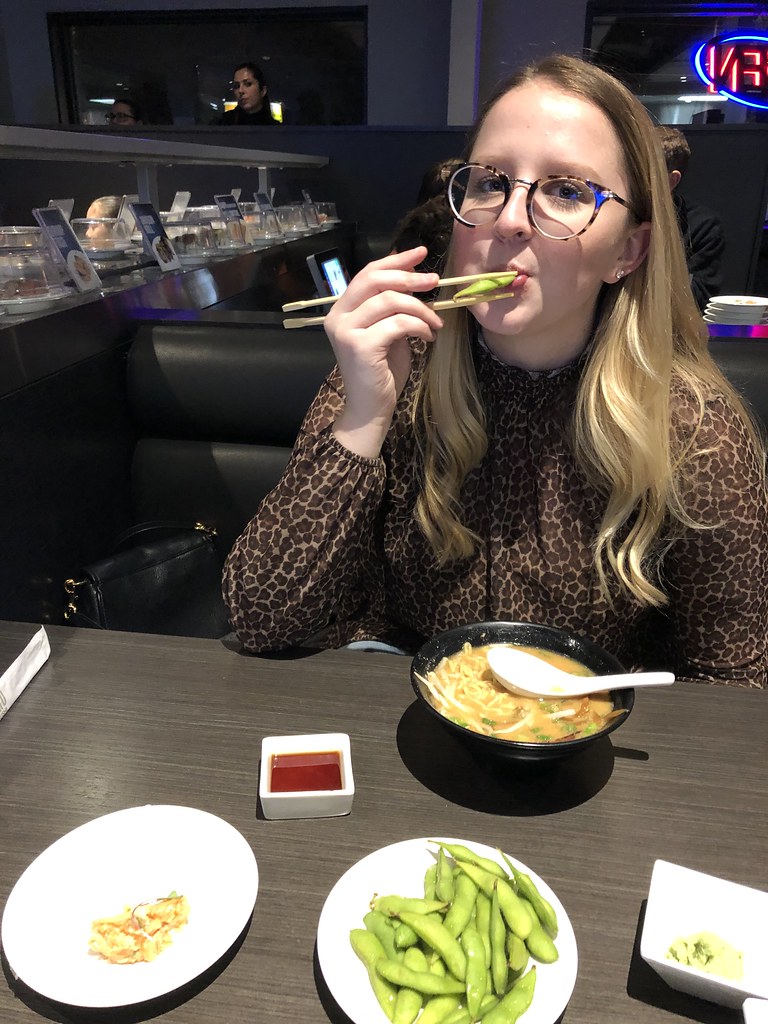